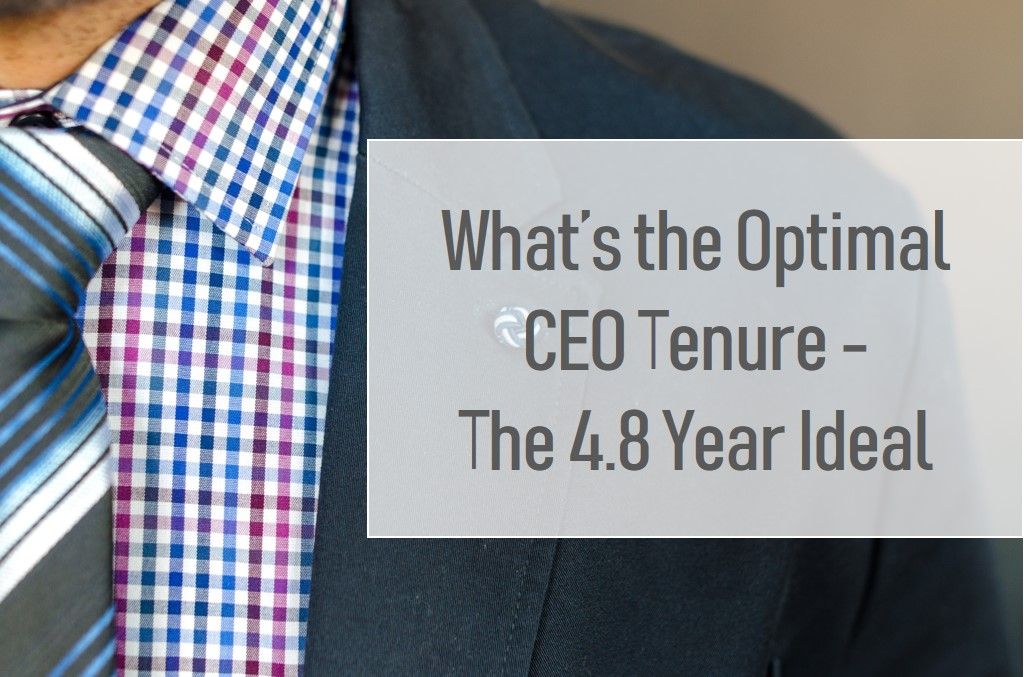 Last week the Wall Street Journal published an article titled ‘CEO Tenure is getting shorter. Maybe that is a good thing’. The article came on the heels of the recent firing of GE’s CEO John Flannery ostensibly because the pace of change driven by him was deemed too slow by the firm’s board of directors. The article notes that there have been 51 exits of CEOs from notable firms through September of this year, outpacing the turnover rate of last year.

Mr. Flannery’s abbreviated eighteen-month tenure is noteworthy because CEOs of larger concerns such as GE tend to remain in place much longer. A U.S. Conference Board study noted that in the year 2000, CEOs remained in their posts an average of ten years. By 2012 that number had been reduced to just over eight years though it rebounded in 2013 to over nine years because of ‘the waning effects of the 2008 financial crisis and stronger markets’. The Conference Board report posits that CEO tenure in general has declined slightly over the years in line with increasingly competitive and disruptive markets and the increase in CEO recruiting, especially be PE firms. Activist investors have also played a role in unsettling the status quo in many firms. Still, CEOs keep their jobs much longer than the average worker. The same Conference Board report cites a 2008 statistic showing that the employees in the broader labor market remained in their jobs an average of just over five years, compared with just under five years in 1983. This number is unlikely to be increasing any time soon.

Unfortunately, the ebbs and flows of CEO tenure have little meaning without some sort of framework to contextualize them. The Wall Street Journal article seeks to provide this by referring to a study from 2012 (Luo et al) that argues there is an ‘optimal’ tenure length for CEOs. That number is 4.8 years. Using a seasonal metaphor, the authors of that study argue that CEOs are most effective in their early seasons because they are most open to outside and inside inputs and to taking risks. They expand their knowledge and skills repertoires during this time and generate new ideas and initiatives, thus improving firm performance. In their later seasons however, CEOs commit to current, sometimes obsolete paradigms, rely more on internal information sources, and become risk averse, tending to adapt less to the external environment and hurting firm performance. In other words, their world view calcifies, they surround themselves with people who generally share their views, and they become less adept at adapting to market and competitive changes. Furthermore, if boards and CEOs get too cozy over the years, directors are less likely to ask the hard questions of whether the leader is being too cautious or too internally focused to make the right decisions for shareholders. The authors also posit that market volatility and decline exacerbates the inward turning tendency.

Luo’s seasonal model does not however map effortlessly to every situation. He argues for example that a CEO’s success, and tenure, is tied to cultivating productive internal relationships and an effective corporate culture. He also argues that industry uncertainty and disruption can facilitate the task of mobilizing employees to ‘overcome their resistance to change’. The case of Mr. Flannery is one of a thirty-year GE veteran tasked with reinventing an old economy company struggling to remain relevant amidst unprecedented disruption. His ‘openness’ to outside opinions, his relationships with employees and his willingness to take risks presumably differs presumably from say Herbert Diess who took over Volkswagen earlier this year also with a mandate to drive change to a major corporation deemed to be in need of change. Mr. Diess is a veritable newcomer to VW having joined from BMW in December 2014.

One can reasonably ask to what degree did those specific variables really played in Mr. Flannery’s short tenure and to what degree will they play in Mr. Diess’s success or failure. What is certain however is that leadership and change management are complicated and rarely fit neatly into simplified prescriptive models. That said, the last outsider who came in to run Volkswagen, Bernd Pischetsrieder in 2002, lasted about 4.7 years.