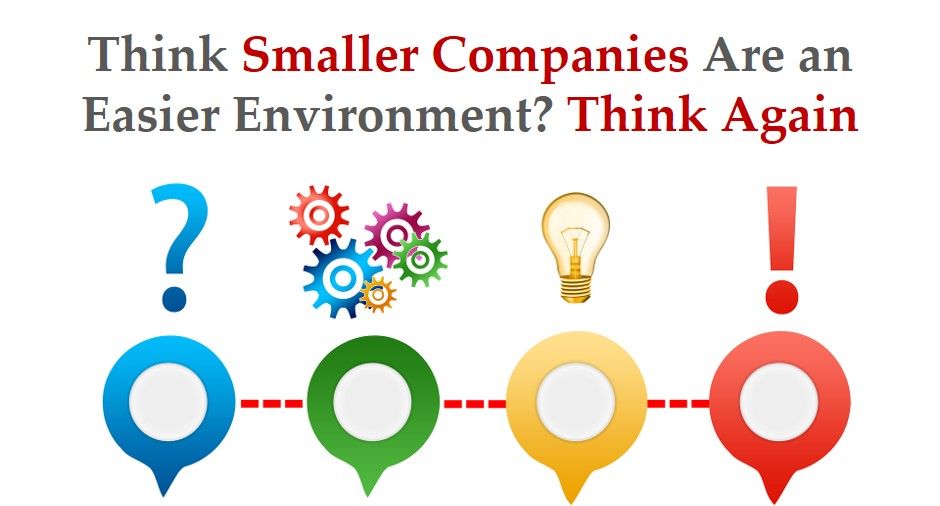 We are often approached by executives who tell us that they are looking to work in smaller, more entrepreneurial businesses. They think that these companies will offer a less convoluted work environment and a more direct route to outcomes from their efforts. The reality is that most people underestimate the challenges of smaller, developing organizations.

Take for example a VP of Sales, that I know, that recently joined a small founder-led $20M software company that was looking to scale. The company had been working on a SaaS version of its software and as this neared completion the company needed new sales leadership to ramp up the revenue. The CEO hired an executive from a large company thinking that a bit of that sophistication in the sales processes and management would facilitate rapid growth to $50M. The executive arrived with the expectation that the challenge would be to re-vamp the sales force a bit, put in the proper sales management tools and then begin the process of finding new prospects and closing deals. The reality could not have been further from the expectations.

The company had done well selling its legacy technology, but the legacy product was woefully out of date and the new SaaS platform was far from ready for customers. The engineering team was struggling with delivery dates and there was no clear date for when the product would be ready for full customer implementations. In addition, there was almost no product management function so there was no clear value proposition articulated for new or existing products. The product roadmaps were vague and ill-conceived if they existed at all. In fact, there was very little in the way of product definition: it was more just a core capability that sales reps matched to customer needs. Although the new VP’s job was to grow revenue, the VP of Sales ended up coaching the nascent product management team on creating product roadmaps, defining much-needed new products and documenting them so that there was something that could be used to train the salespeople. She was also pulled into the product delivery issues and had to hold the engineering teams’ collective feet to the fire to deliver the next release on time. The marketing collateral needed to augment the sales force’s efforts were woefully lacking so she ensured that the marketing team got additional input and direction to both generate leads and create the right collateral for the target market.

Within the sales forces itself there was huge variation in the quality of the reps. Some salespeople were in their roles because of their personal relationships with the CEO, others were professional salespeople with lots of capability. This was a far cry from the environment that she had left where the sales reps were all very capable and well-trained. There were also several difficult personal relationships within the existing sales force that she had to uncover, untangle and act on. There was also a channel strategy that was very unevenly applied and differed from region to region. The sales targets that were optimistically projected for six months were pushed out by another six months as much of the blocking and tackling was completed.

Finally, with all the fundamentals in place the VP of Sales was able to really start having an impact on the top line sales growth she had envisioned. But this was only after a hard year of working to improve the processes and practices of not only the sales team but several other teams as well.

As an executive she got far more than she bargained for but took it all in stride and really embraced the ambiguity and need for broader leadership within the business, something she will carry with her throughout her career. It was a far cry from the sophisticated environment she left with solid engineering, excellent product management and marketing, consistent recruitment, training and development of sales reps. And it was a far more difficult journey than she had ever imagined or expected. Unfortunately, the outcomes are far less positive for many ‘professional’ managers thrust into such companies. Lacking the disposition, adaptability or versatility needed to succeed, many prove woefully unsuited and withdraw, admitting later that they had ‘no idea’ what they were getting themselves into.

Paul Hudson has been helping companies attract and select senior executives for over 20 years. Even he can’t believe that he has been doing executive search that long.