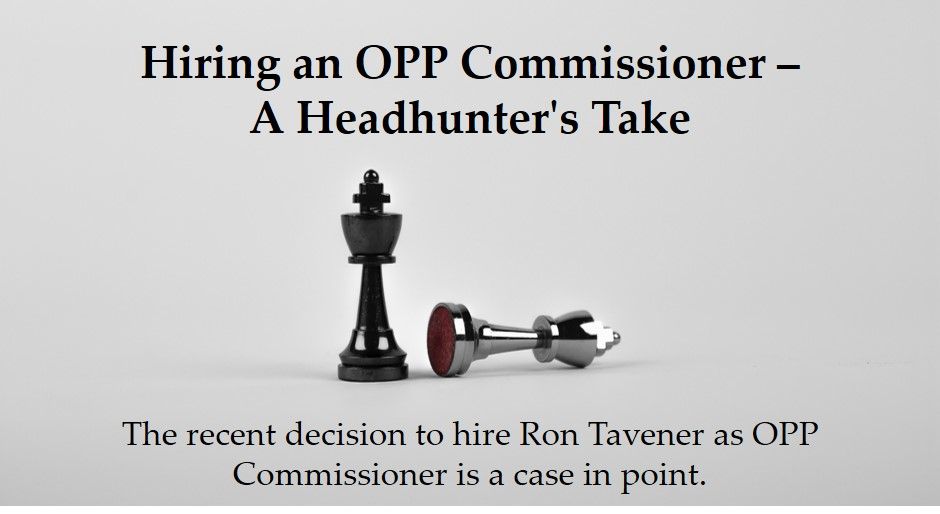 Executive search processes and their outcomes fascinate me to no end. I enjoy trying to figure out how organizations determine their requirements and how well the outcomes line up to them. The recent decision to hire Ron Tavener as OPP Commissioner is a case in point.

Let’s start with the basics. The Ontario Provincial Police (OPP) is the largest deployed police force in Ontario and the second largest in Canada after the RCMP. They employ approximately 10,000 people across the province with a head office in Orillia. The top job in the OPP is the Commissioner. Ranks below that of Commissioner are, in order, Deputy Commissioner, Chief Superintendent, Superintendent, Inspector, Sergeant Major, Staff Sergeant, Sergeant and then Constable. It is safe to say that it takes some time to climb the ranks of such an organization. Commissioners appear to serve four-year terms though these can be renewed as evidenced by Gwen Boniface who served as Commissioner for 8 years.

Police are highly specialized paramilitary organizations, tradition-rich and relatively inelastic. They do not lend themselves to cross pollination of leaders from other industries. Laddering up is the norm, with process bound built-in steps to ensure that qualifications rather than cronyism or nepotism move employees up the corporate structure. Fairness and objectivity are important and thus the process of finding police leaders is almost always in the form of open competitions which are advertised broadly. Executive search firms are often brought in to ensure objectivity of process and to canvass the market to ensure that the best possible candidate is hired. External and internal candidates are judged against the selection criteria. If a police force is deemed to be functioning well, continuity and succession will likely weigh most heavily in the decision-making. If controversy or cultural dysfunction is problematic, outside change agents may be favored over those from within (see current search for a Chief of Police in Calgary for example).

The outgoing Commissioner of the OPP is Vince Hawkes who served in the role from 2014 to 2018. His career narrative merits documenting. Hawkes joined the OPP as a constable in 1984 and worked his way up the ladder across a variety of service units. In 2006 he was appointed Deputy Commissioner serving as the provincial commander of the investigations and organized crime units. In 2010 he became Deputy Commissioner of field operations where he was responsible for five OPP regions, the Aboriginal Policing Bureau and a total of 4,500 staff. He holds a BSC from U of Ottawa and an MBA from University of Toronto. I am not privy as to how effective he was considered in the role.

An international executive search firm was hired to manage the search for the new Commissioner. The posting for the role was clear, logical and not, at least on the surface, overly controversial. It referenced the need for:

– “A track record and demonstrated ability to provide executive leadership in a complex policing organization at a Deputy Police Chief or higher level or Assistant Commissioner or higher level in a major police service.” The understanding here is quite clear. They are looking for someone who is either already in a senior leadership role in a police organization or whose next logical step in their career is such a role. Note that it does not say that the organization is open to more junior but high potential candidates with the confidence and ability to bound 3 or 4 steps up the ladder. It assumes that executive leadership skills are built block by block and that for a role such as this, the OPP covets someone with experience in the top job or someone groomed and ready the top job.

– “Demonstrated strategic abilities and proven ‘transformational’ skills. Interestingly, these are defined in terms of innovation, continuous improvement and leveraging digital technologies.” They are not referencing the continuation or acceleration of efforts to apply advanced technologies to their world…In other words they covet a sophisticated, modern, technology leveraged police force and want someone who can get them there.

– “A leadership development mindset and the ability to continually refine/improve relationships between the police, the public and other stakeholders including the large indigenous communities the OPP serve.” This is where experience or capabilities in culture change is implied.

Each of the above requirements were likely ranked/weighted and then converted into interview questions by which each potential candidate could be identically evaluated. So far so good.

Sometime after the position was posted however the profile was changed and reference to experience at the ‘deputy police chief or higher level or assistant commissioner or higher level in a major police service’ was removed from the requisite criteria. When asked about this, the headhunter who was managing the search said “eliminating the rank requirement was done to broaden the pool of applicants. It turned out that over half the pool of applicants were not at the Deputy Chief level’. It has been reported that a total of 27 people ‘applied’ for the role of OPP Commissioner of whom fifteen were ultimately interviewed. The use of the term ‘applied’ suggests that the role of the headhunters was solely to screen incoming resumes and manage the selection process rather than ‘search’ for candidates beyond those that applied. Judgments on the expected size and quality of candidate pool, including the internal candidates, had to be built into that decision.

It was subsequently announced that Ron Tavener was the candidate of choice. Mr. Tavener is a 72 year-old employee of the Toronto Police Force who joined said force in 1967. He is currently a unit commander responsible for 3 divisions and approximately 700 staff. As a superintendent he is technically 3 levels below that of chief. Tavener’s education, training or other extraordinary qualifications were not noted in any of the publications I reviewed. Community Safety Minister Sylvia Jones explained the selection of Mr. Tavener by stating, “We were looking for someone that understands front-line officers, that understands the challenges that are there, and the hiring process saw that clearly”. If this ‘understanding of front-line officers’ was such a key consideration one might have thought it would have been prominently listed in the requirements document. Perhaps it was a given since only police officers who rose up the ranks were invited to apply. Given the logic of the decision, one might expect a Manager or Director of Line Operations to become the next CEO at Hydro One.

I do not know Ron Tavener, but hiring a 72 year old man with 50 years of mid-management experience with one organization into a CEO role is, let’s just say, odd. Even more odd is the government’s assertion that the recommendation from the selection committee was unanimous. Unanimous?? Who exactly was on the selection committee (the press reported that Mario Di Tomasso who is now Deputy Minister of Community Affairs and was previously Ron Tavener’s supervisor at Toronto Police Services was directly involved)? Ron Tavener has never led any organization. He has never had to be the ‘big picture’ strategy leader. He has never managed an organization with this many people or dealt with this much complexity. He has no experience walking into another organization and adapting to it, period, let alone leading any kind of transformation, digital, cultural or otherwise. How could he be the ‘unanimous’ choice? Surely there had to be one internal candidate within the OPP who stacked up to this individual, or charitably, came close to this individual, and whose appointment would be less contentious and potentially disruptive than the hiring of Mr. Tavener promises to be. There are some pretty impressive profiles on LinkedIn of Deputy Chiefs in Toronto and other Canadian cities that would appear to have merited at least an exploratory phone call long before Mr. Tavener.

I will admit that have a surface understanding of the OPP organization, its hiring process and dynamics. Perhaps finding someone willing to relocate to Orillia (if that is where the chief must reside and be based) was exceedingly difficult. Perhaps there is something in the OPP culture that makes it a ‘stay away’ zone for high quality potential candidates? Perhaps the pool of internal candidates had not quite ripened to produce a top-grade successor. Perhaps Mr. Tavener is a transitional leader until they ripen. Perhaps there were 10 other variables that make the decision to hire Mr. Tavener a reasonable one, given the circumstances.

Let’s hope that my perspective from the cheap seats is simply wrong because otherwise this has the pungent smell of a ‘thank you’ gift from the Premier to an old friend, the same premier who campaigned on cleaning up the gravy train. It would devalue the integrity of the OPP and the complexities of leading it in fast changing times. It would also hurt OPP morale and risk the reputation and effectiveness of the whole organization.

I can’t think Odgers will be trumpeting the success of their efforts on this search….