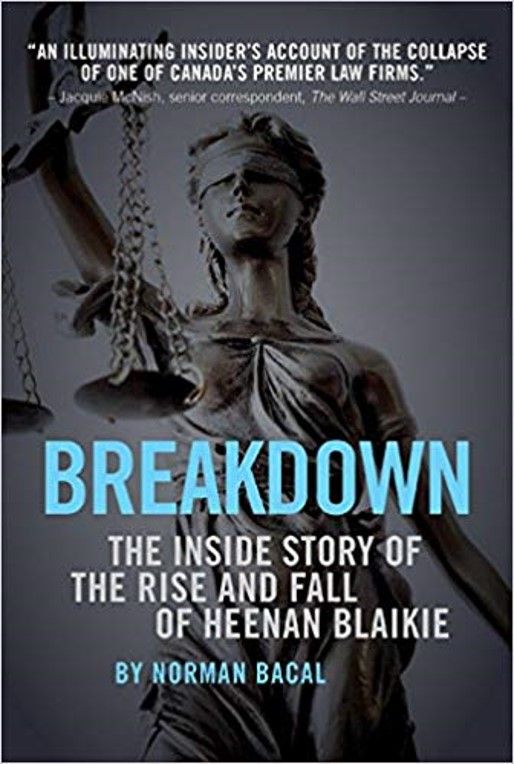 Finally got around to reading ‘Breakdown: The Inside Story of the Rise and Fall of Heenan Blaikie’. Written by, and from the perspective of, one of the firm’s long-time managing partners, the book speaks directly to how changes in an organization’s life stage should, but in this case did not, inform the best approach to management. The consequences for this firm were catastrophic.

Montreal-based Heenan Blaikie was a labour and tax law firm led for years by its two named founders. One ran the day to day and the other focused on strategy. The firm expanded to Toronto with aspirations of becoming a national labor law firm. There seemed to always be friction between those inclined towards incremental, safe growth and those with more audacious aspirations. An high flying, risk taking entertainment law practice in Toronto further complicated the corporate culture. Over time, the firm found its equilibrium with labour law paying the rent and the entertainment group’s big deals generating the big returns that funded expansion.

The book describes a proud, informal, fun, entrepreneurial culture that is respectful, collegial and ‘egalitarian’. The author sprinkles illustrations of the company’s values throughout the book stating at one point ‘we would never hang a junior lawyer out to dry, especially in front of a client’. On another occasion, he lauds the firm’s ‘equitable’ view of distributing profits among partners by stating, ‘we might make a little less money, but we were always proud of where we worked and who we were’. The partners sacrificed efficiency for harmony and saw themselves as unique.

When one of the firm’s two Montreal-based founders departs to accept a very senior business sector role, another Montreal-based partner assumes his responsibilities. The transition is smooth with the new leader being well suited to managing the day to day activities. When he subsequently retires, the other founder agrees to become chairman and the leadership baton is handed to two new co-managing partners, one in Montreal and one in Toronto. This is a very conscious decision to manage the risks inherent in the firm’s French/English, entertainment law/labour law, Montreal/Toronto ‘tribal’ dichotomy.

The author acknowledges that serendipity plays a role in the successful sixteen-year leadership partnership that followed between him and his Montreal-based colleague. A self-acknowledged introverted tax and entertainment lawyer, the author naturally gravitates to strategy and finance while his colleague (a labour lawyer) managed the day to day. One took responsibility for the Montreal office while the other the Toronto, Vancouver and LA offices. Neither has an interest in the other’s domain and thus there was little overlap or conflict. They just meshed. The author describes their approach to managing during reign especially the patience, caring and listening skills required to manage the ‘difficult personalities’ found in a law firm. Among their strategies was to consciously manage the communication ‘spin’ to the partners. One of the firm’s founders had advised them, ‘we don’t ever want to scare the partners…some will blow it all out of proportion and suddenly the sky is falling, and instead of practicing law, everyone is worrying about a crisis that they have manufactured. I have seen how this has destroyed other law firms, so let’s just keep everything in perspective and deal with it.’ The author notes several times how his success was tied to the heavy investments made by him and his co-managing partner to ‘managing the personalities while never sacrificing the culture of entrepreneurship, respect and fun’. The firm grew exponentially during this period.

In 2007, a governance review tabled a leadership transition in 2012 giving the firm 5 years to plan for succession. The issue of the chairman’s retirement date was left to the chairman to decide. No concrete succession plans were made pursuant to this review and as a result little happened.

The firm continued to grow in those ensuing five years, highlighted great successes and, in the words of the author ‘a few’ missteps (notably several expensive unsuccessful lateral recruits, a costly international expansion including into Paris, and a somewhat contentious management consulting practice). The author acknowledges that some of those mistakes affected his leadership currency with the other partners. As he states, ‘though the mistakes were few in number over the years, I was to learn that no one forgets the missteps’. At the same time, the winds of change reached the law business. For example, pricing pressures and new business models began to affect parts of the business. The firm, like most established players, was slow to acknowledge let alone react to those forces. Profits were affected.

Meanwhile, growth brought challenges of management including practices that some did not like, customers that some did not believe should be represented by the firm, partners more vocal than others in expressing their opinions. The approach to management did not change however, as the personalities were massaged, compromises were sought, and information flow was managed. Though some departures occurred, the author indicates that the collaborative, collegial culture remained intact……until it didn’t.

By 2011 the firm had grown to 1,100 staff and revenues of $250mm with multiple offices and disciplines. When discussions finally turned to succession, it was given that the two managing partners model would continue. This despite the fact the firm was now four times larger than when the current incumbents were appointed. No work had been done to that point to groom successors though again this was not unprecedented. The firm’s chairman decided that his final act as chairman would be to lead the committee tasked with management succession. The author reminds readers that this individual was the strategy rather than operational half of the original founding duo, and not the individual who had appointed him.

The process proved challenging with grumblings of limited consultation, communication and transparency among some of the firm’s partners. Managing those dynamics had always been a forte of the managing partners with effectiveness resting on goodwill and personality. However, errors had eroded some of that goodwill and the grumblings were difficult to placate. The burden of calming the troops would lie on the shoulders of the successors. They would need to choose well. However, it does not appear that this factored into the selection process. No contemplation was made that an outsider might be in order.

The firm selected two new co-managing partners, and as in the past, one was based in Toronto and the other in Montreal. Though neither had any management experience, they were both lawyers and insiders which was considered more important. No management/leadership training was provided to the successors, and it was assumed that the two would get along. As neither of the previous managing partners would remain with the firm to aid in the transition, the change in control was quick and total.

Unfortunately, all did not work out as planned. The author states that one of the managing partners proved to be ‘well meaning but indecisive and the other decisive but polarizing’. The latter had been one of the placated dissenters and felt strongly that changes were in order. He wanted to end the experimental business ventures, weed out the weaker partners and associates, reign in the international expansion and on and on an on. And his style was assertive…there was now a sheriff in town. The era of tempering good and bad news was over. The changes came quickly. The compensation committee’s philosophy changed immediately with the relationship between performance and pay becoming clearer. Partners would no longer be ‘carried’, they would be culled. The author laments that ‘the process lost its rounded corners’ and while profits trumping people may well have sounded good in theory, ‘it did not work out so well in practice’.

The book provides a blow by blow accounting of the firm’s unravelling as employee loyalties shifted from the firm to themselves. Defections begat more defections and fearing a stampede, partners to repatriate their equity. The spiralling could not be stopped.

At one point the author acknowledges that perhaps professional management should have been introduced at some point in the firm’s growth. That said, he is somewhat short on specifics saying only that ‘larger firms must be organized into subunits, each of which inevitably will lobby management to advance its own interests’. He ponders whether a single CEO would have been better than the two-headed leadership structure that the firm clung to? And he reflects on the role of the board and how it could have been more effective.

In the end however, the author clings to the notion that law firms must, by their very nature, be managed differently than other firms. As he says, ‘not only are the partners the investors but also their work and client relationships are integral to the success of the business on a daily basis. In all but the biggest firms, most partners feel they have the right to participate in decision-making, so the managing partner must rely on the power and politics of persuasion’. In other words, the author still believes that other forms of corporate governance don’t work in a law firm. Heenan Blaikie had it right, they just made errors in execution. He also argues that Heenan Blaikie was successful because it held a set of principles and values which grounded a culture that placed people above profits. It worked hard on creating a sense of egalitarianism and fun that attracted and kept people engaged. When that went, the firm died.

You will need to read the book and come to your own conclusions….